The Assassin’s Escape is nearing publication. I have submitted the files for review and will soon be ordering the proof to do the final check before publication.

I am incredibly excited about getting my second novel out to readers.

Many thanks to Christian Hecker of Tigaer-Design.com for spectacular cover art!

This entry was posted in Recognition, Updates.

The Assassin’s Escape is currently being proofread. I’m looking forward to the feedback from the proofreaders.

Meanwhile, I’ve been working on The Assassin III. I’m withholding the actual title because it would be a bit of a spoiler for the ending of Escape. The planning is completed as are eight chapters of the first draft.

I can’t give you too many details because III kicks off shortly after Escape ends, but it’s already been fun getting things started. A combination of new and old characters makes for interesting interactions and new agendas. The foundation has been established and it’s time to stir up the still waters. 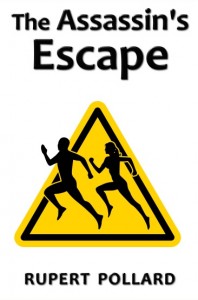 I am extremely excited to announce that I’ve finished the second draft of the Assassin’s Escape.

I cleaned up some clunky passages, added a couple chapters, bolstered one of the ongoing conspiracies, and beefed up the drama and tension of the ending.

I’m not certain yet whether I’ll take a step back before breaking out the wax and polishing up the prose. But at the finish, I was (and currently am) deeply immersed in the action that had just concluded, and I’m really excited about getting the rest of the story as polished as the new and re-written chapters are.

It was definitely more fun the second time around.

The Gift that Keeps on Giving!

Just created an outline for chapters 1 and 2 for The Assassin III (III stays until Escape has been published – the current title would constitute a bit of a spoiler).

I’d like to say, “Enough! Get back to work on The Assassin’s Escape’s 2nd draft!” but I’ve got to strike while the iron’s hot.

This entry was posted in Author Moments, Updates.

I’m glad you all could make it.

In the event you’re wondering about the post’s title, it’s a quote I have always enjoyed from the Eddie Murphy film Trading Places.

What is Rupert working on?

This is an easy question for my first blog post.

The answer is: I am currently working on the first draft of the sequel to The Assassin’s Cradle.

This entry was posted in Author FAQ, Updates.