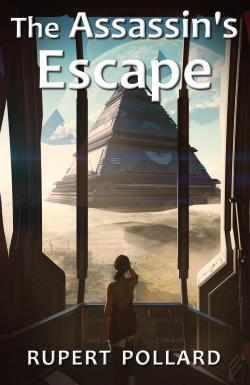 It’s been three years since events on Ganoten sent Darla to the remote planet Kierason. Devastated by her lover’s disappearance and his implication in her father’s assassination, she buried herself in government duties. August General Holliwell orders Darla to actively pursue social relationships, particularly the romantic kind, and Darla reluctantly complies. Before she can get back on her feet, a mysterious figure from the past turns her world upside down, sending her on a perilous journey that could be the end of life as she knows it.

The sequel to the action-packed Assassin’s Cradle, The Assassin’s Escape explores the personal and political consequences of House Konoliner’s fall from Ganoten and introduces a sinister mystery that will change the lives of everyone in the Tonatium Region. Don’t miss the thrills and chills of the Assassin’s Escape.

The second novel by Rupert is available now on Amazon.com in paperback and Kindle editions, or